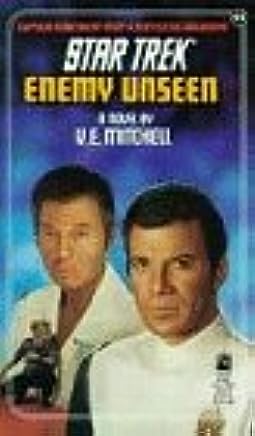 
The Heart of the Warrior. The 34th Rule. What you Leave Behind. Mission Gamma 1 Twilight. Avator 1. Rebels series 1 The Conquered. The Escape. Incident at Arbuk. Ghosts of a Chance. Bless the Beasts. The Black Shore. The Nanotech War. Black Fire. Web of the Romulans. Mutiny on the Enterprise. The Trellisane Confrontation. The Tears of the Singers.

Dwellers in the Crucible. Pawns and Symbols. Mind Shadow. Crisis on Centaurius. Enterprise; The First Adventure.

Home is the Hunter. Ghost Walker. The Rift. Prometheus: Fire with Fire. We discuss the first original German language Star Trek novel and its translation, the Prometheus and its unique abilities, the terrorism allegory, the book's relation to the on-going Pocket Books novel continuity, the role of the Klingons, and wrap up with our final thoughts and ratings. David Mack: Fortune of War. We talk about the links to TNG's "The Survivors," the Husnock, Admiral Riker's new role, the characters of Titan, "The Chase" on speed, and wrap up with what David Mack has on the go for future novels and where you can find him online.

Paula M. Erdmann: I, The Constable. We talk about the inspiration for the story, the research they did to capture the noir feel, changes in the society of Ferenginar, the voices of the characters both old and new, Quark's seemingly newfound generosity, some fun references, and wrap up with where you can find Paula and Terry online.


Stargazer, his relationship with numerous figures throughout his life, the context that this book adds to The Next Generation, a surprising Star Trek: Discovery connection, and wrap up by discussing The Orville. Ethan Siegel: Treknology. We talk about a number of technologies covered in the book, the process of writing it, the influence Star Trek has had on our collective imaginations and the technology of modern society, where our technologies may go in the future, and wrap up with where you can find Dr. Siegel online. We discuss the two stories told in tandem, the character of Jasmine Tey, crime drama as Star Trek story, the nature of Rebecca Sisko, a completely alien encounter, the possibility of a Gamma series going forward, and where to follow David R.

Desperate Hours. We discuss the process of collaboration with Discovery's writers, Captain Pike's devotion to duty, Enterprise vs. Shenzhou, the Shenzhou's bridge crew, comparisons to the Vanguard series, Spock and Burnham, the look and feel of the universe, the book's non-canon status, and finish up with what David Mack has on the horizon.

We discuss the setting, the bond between Sarek and Amanda, Klingon ambassador Kamarag, a timely topic of xenophobia, Kirk's nephew Peter, how Discovery's depiction of Sarek might compare, and wrap up with our final thoughts and ratings. Mudd In Your Eye. We talk about silly reasons for war, transwarp beaming, the nature of death, another society run by computer, Stella Mudd, how we think Mudd might compare in this novel to his appearance in Star Trek: Discovery, and our ratings.

Patterns of Interference. We discuss the dictator Maltuvis, the ultimate Prime Directive debate, a strange new world, freedom and truth, Section 31's fatal flaw, what's in store for Trip, and Archer's beagle companion, Porthos. Scott Mantz: Star Trek Fotonovels. We discuss our fond memories of the '70s, Scott's favorite episode of all time, his collection of fotonovels, their influence on John Byrne's New Visions comics, and the interviews and glossaries found in the back of the books.

We discuss the plot of the novel, a sad end to a family crisis, the Q family dynamic, the ending of the novel, and wrap up with our final thoughts and ratings for both this novel and the Q Continuum trilogy as a whole. We discuss the research, where Dayton got his ideas, references, some great places for food and drink on Kronos, dos and don'ts while traveling in the Klingon Empire and what's next for Dayton.

source We discuss the nature of the Preservers, fate versus free will, duplicate Earths, secret groups within the Federation, the two Kirks, Teilani, and wrap up with our final thoughts and ratings. As the Enterprise holds her own against a swarm of energy creatures determined to keep the crew from completing their mission, Q leads Picard on a journey through his past, where a force even greater than Q and with an even wider cruel streak wreaks havoc on the galaxy. We talk about stardate snafus, peer pressure, bad parenting, 0's gang of evil-doers, the end of the TKon Empire, and wrap up with our final thoughts and ratings.

Enigma Tales: Una McCormack. Garak has gone from spy to revolutionary to ambassador to castellan of the Cardassian Union in just a few short years. In that time, Cardassia has changed immensely. But the people of Cardassia still share a lot of guilt, and ghosts of the past may be rising again to ruin the lives of some of Cardassia's finest. Now, it is up to Dr. Kate Pulaski to discover the truth before it is too late! We discuss the plot, the characters, some historical touchstones that the story parallels, the nature of Cardassian enigma tales, the state of Dr.

Bashir, and wrap up with Una's upcoming projects and where you can find her online. Please note: the first part of the feature is spoiler-free, and we get into spoilers for the second half. Shield of the Gods. The Department of Temporal Investigations is responsible for maintaining the timeline, preventing galaxy-ending paradoxes, and stopping temporal criminals. Their track record for meeting these goals has been put in jeopardy by a criminal named Daiyar who intends to use an item stolen from the DTI's vault to change history, and it's up to the agents to put an end to her scheme.

We talk about Daiyar's scheme, character vs. When Q appears on the bridge of the Enterprise-E to stop a scientific experiment, Picard is understandably annoyed.